This week’s had its ups and downs with gaming, but it’s ended up on a high note.

First off, I’ve been trying to manage my FSX addons to little success. After adding a few new aircraft and scenery, I found the sim simply bogged down. Last week I mentioned load times were pretty long, and I was starting to get fed up with it.

While I’ve been planning on upgrading my prebuilt PC to modern standards, FSX and X-Plane gave me the final push to upgrade. I ended up getting another 8GB of RAM, a 480GB SSD Hard Disk, and a GeForce GTX 960.

Unfortunatly, it didn’t help with FSX at all. The 32-bit architecture will always keep it held back. I was looking forward to a nice day flight from Payne Field (Everett) to Hoquiam (Near Ocean Shores). I had planned on flying the A2A Piper Cherokee using online ATC, and filed a flight plan on VATSIM (a simulated air control network). It was a disaster, I had three crashes (at 15 minutes each, that’s 45 minutes of loading) because I simply tried to Alt-Tab so I can set up the ATC program. After tweaking, I was able to get the sim running in windowed mode.

Then the aircraft selection. The Cherokee was in some sort of “damaged” state, saying the prop was damaged and it wouldn’t let me repair it. I tried copying over config files, looking at the forums, and reinstalling stuff…yet it wouldn’t fix the problem.

Then I switched to X-Plane just because I was sick of dealing with FSX. Last week I got a new haze addon, cloud and weather addon, and a new high-detail C-172. Mew hardware was able to run some intense detailed scenery addons (freely available!) and I figured out how to render satellite imagery over an area using a donation-ware program (still waiting on the software download, but the programmer is pretty legit). Lastly, I got a VATSIM plug-in for X-Plane to speak to ATC, which something missing in the sim.

The detail is insane compared to the A2A aircraft

The result was far above anything I experienced with FSX. The initial load only took about 5 minutes, no crashes, the frame rate was constant, and it genuinly felt like I was flying a real aircraft. The ATC at Seattle Center picked up my flight plan and was very patient as I learned some new terminology. Some of my Navy training helped out too as I was able to provide precise detail over the radio over what I needed. Hearing chatter from other simmers (flying big airliners and GA aircraft) simply passing Seattle through was a huge element. It really felt like the real deal.

Looking toward the Olympics

The entire time I ran the sim at about 30-40 FPS, which is very good for most sims given the amount of taxing detail they process…the new PC upgrade was well worth it. While the scenery detail (i.e. the trees, houses, landmarks) is not as good as FSX’s Orbx Pacific Northwest stuff, it wasn’t that big of a deal. I spent the entire flight looking at sectional charts, talking to ATC, and reading up on stuff. I didn’t have time to look down and say “Hey they didn’t properly render some buildings in Bremerton…” The sunset and flying over the Olympics was simply stunning.

It was a fantastic flight and a smooth landing. I stepped away satisfied (the same way I am satisfied when I finish a Gundam model) and it’s a feeling I rarely feel playing normal video games. Simply put, it was the best way to end what could have been a pretty shitty day. 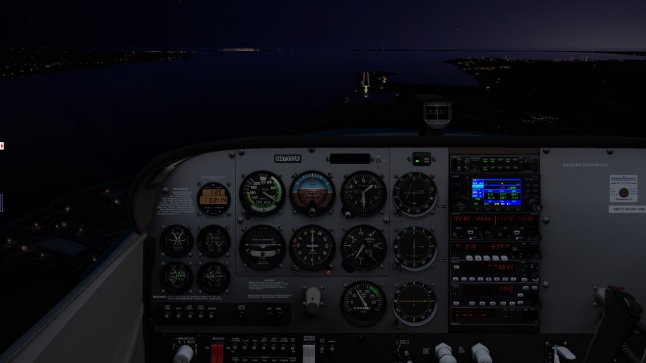 The lighting details in incredible.

The landing was smooth, and just look at the detail of those landing lights!

Not sure what my plan is for tomorrow. I’m kinda burned out with simming today, but I have a bunch of other games I want to get back into. I reinstalled Train Simulator and picked up a new route for it. Also have some MMORPGs I want to get back into: Black Desert Online and Elder Scrolls Online. I also have Diablo III to play, Warthunder, IL-2 Sturmovik, and a few others.

But I feel at least at this point I can take it easy and not worry so much about spending hours loading up my download queue for essential addons or tweaking performance settings in FSX. I’m just going to stick with X-Plane for a bit and simply enjoy simming the way it’s meant to be.