Working on a new project now, the Hyaku-Shiki (百式), or Type-100 in English.

It’s another of Char’s (aka Quatro’s) Gundam’s in the Zeta series, notable for its shiny Gold color. This should be a fun project, and due to the nature of the model, no painting for me :), which is a good break from the busy couple of months I have ahead of me. The following photos show my progress so far. 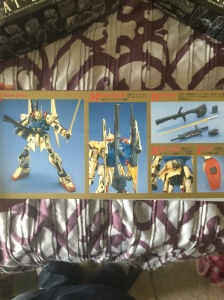 I’ve picked up One Piece and Dragon Ball Z Kai for my anime watching, getting myself engaged in long involved series just for the fun of it. A lot of people don’t really like One Piece due to the art style, but I’m a fan of the simplicity and that the story doesn’t really take itself too seriously. DBZ Kai, on the other hand is great…I’ve longed to see DBZ without the extra filler…spending hours watching others taunt each other without any sort of resolution…a few episodes in to the series and I am really enjoying it.

I’m starting to read through Star Wars: A New Dawn, which is starting off slow, but it’s a decent read so far, I’m also reading the new comics from Marvel/Disney, and I’m simply soaking and enjoying all the new canon material!

I miss the Star Wars Expanded Universe, but at the same time it’s good to let it go. Despite the great stories by Timothy Zahn, Michael A. Stockpile, and many other authors, I felt that the EU got to the point where it wasn’t so much covering the original vision of Star Wars, and simply leapfrogging off of whatever story was popular at the time. I don’t by all means wish to discredit any author, because they were fantastic stories…but I felt it was time for something new…something fresh.

So the new tie-ins, movies, books, comics…it’s a new direction. It’s like elusive group has the knowledge of what the story is going to be and knowledge of who their demographic is, and slowly giving us glimpses and details of their vision. I had lost faith in Lucas after the prequel trilogy, and felt he had a different view of Star Wars than what most people wanted. I recall an interview many years ago where someone asked what he wanted to do if he ever made Episodes VII+, in which he stated he wanted to focus more on R2-D2 and C-3PO (no source, sadly). I felt he was more interested in creating great children stories than grown-up and adult-themed films…the fanbase of Star Wars grew up and he had lost touch of that.

In personal life-news, almost done with Step 8 of the Japanese Core 1000 in iKnow! (the 1000 most common words), and I’m grasping A LOT, especially when I listen to or read Japanese media and games.

I’m actually quite intrigued, amused, and surprised at some recent revelations. A couple of days ago during my lunch break, I was drawing the character for 弟 (Otouto), which means “Younger Brother” and a co-worker noticed I didn’t really curl the last hook and warned me that it could change the meaning if I’m not careful. My first reaction was “Who the fuck is this guy and why is he trying to correct me?”, but then I started talking to him. He spent much of his early life in Japan and is about N1 level (N1 being the highest proficiency level for foreign learners). I’m about N3-N4 level by comparison.