Exhausting day, but a nice way to end my vacation.

Last night, I did some practice ILS approaches. I didn’t do too bad and nailed most of my approaches. Flew around SoCal mostly, and used GPS and VOR navigation (with radials and stuff) to do an ILS landing.

Yesterday since I had issues with the King Air 200…and blowing up the engines. So today I decided to take it easy…and pick a regional airliner!!!

Taking off from SeaTac in the Dash Q400D

So this morning tried a Dash 8 Q400D, never flew this aircraft before…and I had some issues with the cabin pressure that I resolved by setting up the Bleed Air valves. It’s a good stepping stone to a bigger jet. With it being a regional twin turboprop aircraft with an FMC, I can set up decent approaches by plugging in some data. ILS landing back into PDX didn’t go so well again, somehow it switched over from my planned approach to a direct one. Still have no idea why. 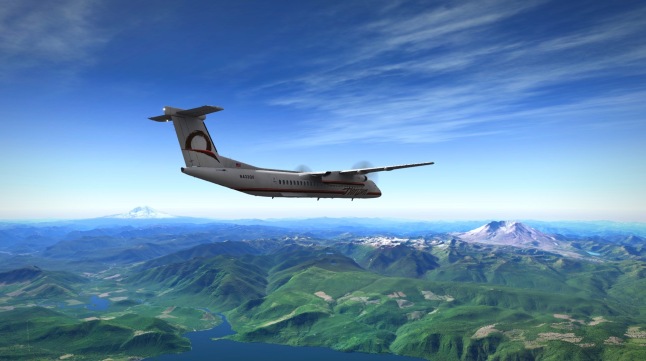 Mt. Saint Helens again. Never get tired of this sight.

I finally got my account activated for FSEconomy. If you’ve ever played Pocket Planes (it can’t be just me), then the idea is similar. You rent an aircraft and fly passengers or cargo from Point A to Point B. It uses the data from the simulator and adds an MMO-like experience. I went to an airport that had a Beechcraft Baron 58 (can hold up to 5 people), picked up 5 people and took off from Sequim, WA to Arlington, WA and I got about $1600 for the trip.

The inside of a Baron 58, flying over the Straights of Juan de Fuca from Sequim to Arlington 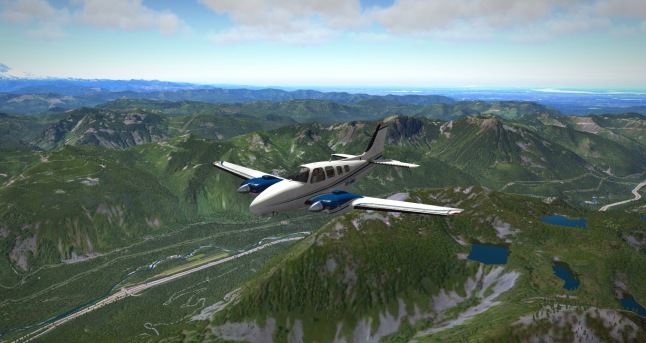 Still going West. Following I-90 most of the way up to Lake Chelan. 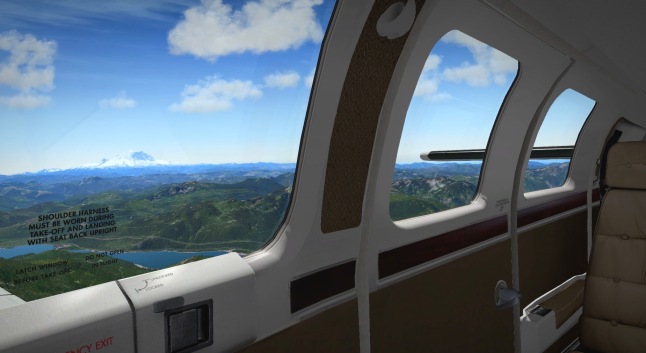 The airport is literally right behind that mountain. Tricky approach.

Now I have some people in Lake Chelan who want to go to Centralia. I’m exhausted but it’s nice to have some goals…and some reason to visit the smaller airfields. Makes a big difference as opposed to simply flying back and forth to familiar places.

I’m not sure what else to do. I’m probably going to go to the Museum of Flight for my birthday. Kinda cool, last time I went to an air museum was at the Smithsonian National Air and Space Museum in DC. I also went to Cape Canaveral as a kid and that was cool.

Trying to get into some games again. I’ve talked about ESO but I’m just not really feeling it. It’s hard to get back into a game after I’ve stopped playing for about a month and a half. Maybe later tonight? Tomorrow…or Sunday?