Recently, I’ve had an epiphany. It seems like I spend almost as much time on portable gaming systems than I do with the at-home console. For good reason though. I blame my sister’s dog, the US Navy, and the WA State ferry system.

You see, our dog has a habit of getting on my lap whenever I try to do work on the laptop or play games on the TV. When I try to move her so I can turn on the PS3 or swap disks she looks sooo darned cute I can’t do anything about it except reach for my Vita or 3DS nearby. 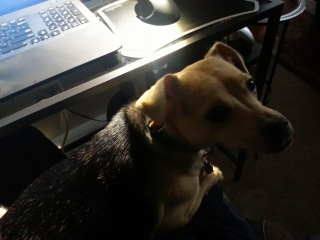 So darned cute!
The same goes for the Navy. Sometimes I’ll leave for weeks, if not months at a time. Often our only (half-cracked TV) in the workshop is in use by the Call of Duty/Madden bros. So playing a random niche title only to have someone walk in the room and ask “Why are you playing a game in Japanese with some weird looking schoolgirls?” kinda draws a bit of a strange conversation in explaining what the style of the game is.
Then there’s the WA State Ferry system. I usually have to handle business in Bremerton every few weeks, and I am absolutely addicted to connecting to my 3DS with 200 other cars around and getting those puzzle pieces and Mii streetpass goodies while I sit in the ferry for an hour doing nothing but play games. I look forward to the commute every time!
I’m actually ashamed to admit I had to trade-in/rebuy a few titles to get the handheld port (Dragons Crown, Tales of the Abyss, etc…) now that I have handheld systems, because I know the chances of me getting the opportunity to play on the big-screen is low, especially with the PS4 coming out, most of my attention will be drawn to that and the shiny new games.
Speaking of PS4, it comes out soon. The launch titles are a bit meh, but I ordered the new Killzone and Assassin’s Creed 4 so that should keep me occupied, along with my PS3 backlog: Tales of Xillia, Neptunia Mk2 and V, The Last of Us, GTAV, FFXIV, etc…Don’t even mention my laptop backlog *looks at Steam list and shudders*…yeah…
The world of gaming never ends. So all I can do is sit back and enjoy it, regardless of whether it’s on console, PC, or in my hands :).